Our spine consists of 24 vertebrae, plus 5 intergrown vertebrae of the sacrum. The sacrum connects to the pelvis and thus to the lower extremity. The nerves emerge between the vertebrae and there are various joint connections that make the trunk mobile and mobile. This complex interplay of muscles, nerves and bones is susceptible to structural strain.

Chiropractic Berlin is not a panacea, but offers a good opportunity to counter structural deficits of the skeleton. Used in the right context, it is quite effective and often brings immediate success.

What is Chiropractic Berlin?

Chiropractic is a method to solve blockades of the spine and joints. I learned the method at the German Institute for Chiropractic. The holistic approach convinced me to not only solve the painful blockage, but also the silent and symptom-free ones. These silent blockades result among other things from posture deficits and can usually be the cause of pain and functional complaints. Furthermore, the treatment is painless, effective and beneficial.

What is the course of a treatment?

I look at them from a holistic perspective. I want to recognize the connections and not only treat the painful part. The first chiropractic treatment is preceded by a medical history and an examination. In this first conversation we will explore your health condition together. This is necessary to get an insight into her everyday life. Often there are already possible causes for the current complaints.

The physical standing up is in constant struggle with gravity.
During the examination prior to chiropractic, we analyse your posture and body statics together. By observing and palpating the pelvis, the spine and other joints, the mobility is checked and the possible cause analyzed.
For the first anamnesis and examination I plan on about 20-30 minutes.
If you are in possession of MRT’s, CT’s or X-rays, as well as findings or laboratory values, I would like to ask you to bring them with you.

For chiropractic treatment, the optimal adjustment of the joints is essential. If the joint is correctly adjusted, the blockage can occasionally be released. Nevertheless, there is still a small rapid impulse that restores joint mobility.
The treatment takes about 20 minutes.

After treatment, the body can react to 2 different possibilities:
The first and most common, as well as best option is to have the pain / failure disappear spontaneously or are significantly less.
Occasionally the pain area reacts with an irritation and the pain does not spontaneously decrease, but maybe even gets a little more intense. The body may react with a sore muscle. This can be completely normal after the first treatment and usually disappears after 3 days.
The success of chiropractic treatment also depends on other factors. Firstly, it depends on how long and how severely a nerve was pinched due to the malposition of the vertebra. Possibly a nerve has become inflamed or the muscles are still very tense.

How should you behave after the treatment?

Your behaviour after the treatment is just as important for success.

What does Chiropractic Berlin cost?

I have a private practice only and I follow the GebüH (fee schedule for alternative practitioners from 1985) when settling the costs for chiropractic Berlin. These costs are covered by most private insurance companies and supplementary insurance companies. Likewise, the coverage of costs is usually guaranteed by the aid.
As a rule, an amount of approx. 50-60 € for the initial examination / initial treatment and 40-50 € for subsequent appointments. Occasionally, public health insurance companies also subsidize the treatment. In any case, they should include the invoice in their income tax.
Payment is made directly after the treatment in cash or by EC card. At the end of the month you will receive a receipt for your insurance or tax.

The chiropractic treatment can be combined perfectly with connective tissue therapy, as emphasis is placed on both straightening and balancing the body.
For pain treatment, a combination with cupping, ear acupuncture or massage can be useful.

What are the side effects of Chiropractic Berlin?

As described above, the body can react with side effects after chiropractic treatment.
To avoid or reduce the side effects, the anamnesis is important.
The following phenomena can occur during or after a treatment:
Occasionally a slight dizziness may occur for a few minutes after the treatment.
Sore muscles, stiffness or temporary irritation may also occur and should subside after a few hours to a maximum of 3.
Your body has adapted and compensated for the poor posture over a period of time.
Your brain will quickly get used to the new information from the receptors in the joints and muscles. 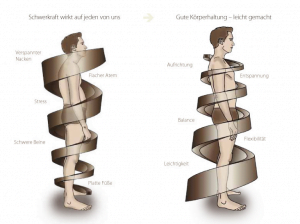